Shambhu Morcha and Khalistan: The Many Anxieties of Punjab Protests 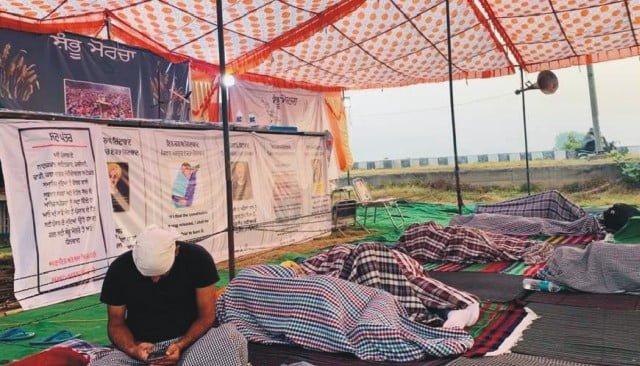 Conceptually the Shambhu Morcha is different from regular Kisan Unions.

ACTUALLY, since July, but much more intensely since the Farm Laws were passed by the Centre end of September, Punjab and some other states have been bursting with protests against the Laws. The non-violent protests in Punjab are wide ranging – over thirty farmer unions at various places, rail roko, at toll plazas, at Ambani petrol pumps, at Adani grain silos, even one at Shambu on the Punjab-Haryana border.

The new Punjab Bills have gone to the Governor and will go to the President and Supreme Court. No one can predict if they will pass. Given the stronghold of the BJP in the Centre, most likely these new Bills will remain in abeyance for long. AAP and SAD have started bickering against the Bills but it is clear that at least publicly the political parties have demonstrated that they stand with the people.

Yet, for a month, the Centre has not responded to the protests. Actually, the Centre has responded but only to deny the protests. The Home Minister said in an interview ‘there are no protests’. The Prime Minster, campaigning in Bihar for elections, mentioned both Abrogation of Article 370 in Kashmir and the new farm Laws as major achievements of the BJP.

When the nation does not even acknowledge Punjab’s protests, denies them, it leads to anger in Punjab over Centre’s apathy. Given this background, yesterday, an event occurred at the Shambhu Morcha. A young man, unidentified, first raised the slogan ‘Inquilab Zindabad’ and since that slogan did not release his frustration, he also raised the slogan ‘Khalistan Zindabad’.

As soon as the slogan was raised, the Shambhu Morcha organisers distanced themselves from him. They even nabbed him and handed him over to the police. The man was contrite. He apologized. The organisers emphasised that they have banned such slogans at their protest.

In fact, the Akali Dal (Mann) which is committed to the creation of Khalistan by peaceful means is also at Shambhu border but has a separate platform. The Shambhu Morcha organisers have clearly disavowed from any separatist views.

For the record, conceptually the Shambhu Morcha is different from regular Kisan Unions as it considers these new Farm Laws to be not only an attack on Punjab’s agrarian economy but the very existence of Punjab.

The organisers of the Shambhu Morcha are going far beyond MSP and asking why – unlike any other trade in these neo-liberal times – does a farmer, any farmer, not have the right to quote his price for his produce?

Yet, since for decades now, state and Central governments use the term Khalistan to discredit Punjab’s genuine demands as a call for separatism, the organisers of Shambhu Morcha have eschewed the term from their vocabulary during this protest.

These are the anxieties of these and other ongoing protests in Punjab. The people seek the Centre to intervene, to listen to their demands, to act upon them, to revoke the Laws. The Centre remains arrogant.When people get angry, it clamps down on them.

The irony of the term Khalistan is multi-fold. One, the term itself has changed meaning over the past few decades and now stands for justice over thousands of human rights violations in Punjab during the militancy years 1978-1993.

Also Read: India and the Spectre of Khalistan

Two, the Supreme Court of India, in two rulings – 1995 and 2008 – held that using the Khalistan slogan is not anti-national. It is, in fact, the right of people. Yet, governments remain blind to these repeated rulings.

Punjab’s stock of coal for power generation is rapidly dwindling. Punjab’s industry is suffering. The wheat planting period is slipping away. The protesters are getting restive. Unless the Centre demonstrates int sincerity and quickly acknowledges the protests and takes steps to genuinely call for discussions, Punjab could erupt. That would be most unfortunate for the nation.