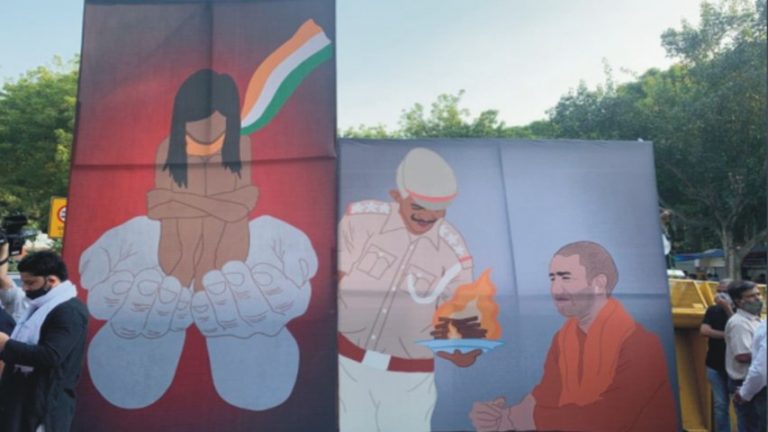 The Lucknow Bench of the Allahabad High Court took suo moto notice of the barbaric, brutality, and fatal assault accompanied by the gang rape inflicted upon a Dalit girl in Hathras.

The cremation of the deceased in a most questionable manner stirred the judicial conscience of the constitutional Court, which led to the initiation of action and summoning of senior officials of the state government and police, including of the district, to be present in person at the next hearing on October, 12.

The High Court constitutionally and legally merits to be applauded for its timely intervention to advance the cause of justice.

The State police and its other functionaries are in sync with each other to hush the anger emanating from the sordid and despicable incident. Contrarily, the more it is being hushed, the more and more it is leaving its odious in the society. It is known commonly, howsoever, deep the dirty article laced with the abhorrent is buried, and is bound to stink.

The police of UP requires to be educated regarding the salutary amendments brought by the legislature after the Nirbhaya rape case that officer of the police station declining to register the FIR shall be prosecuted u/s 166A of IPC for not registering the sexual crime. The Supreme Court has also said so not only for sexual crimes but all other cognizable offenses.

But miserably, the state of affairs concerning the crushing attitude has not changed, for constitutional courts did not take the followup chase.

Lately the Yogi government has suspended the SP and other concerned officers, it’s nothing but an attempt to douse the legitimate anger and it only makes belief affair to put the dark curtain on the dark deeds of bureaucracy committed jointly and severally by the. The only deterrent course would be dismissal from service accompanied by the prosecution together with the confiscation of ill earned property.

The latest story to quell the arousing outrage of the public at large which erupted and gave a seismic shock to all law-abiding citizens. This has no consideration of caste, creed, and religion. Under the garb of Negative Forensic Report qua, the commission of the crime of the rape woven by the police would not pass the sieve of judicial scrutiny.

The shameless statement of the Prashant Kumar, ADG (law and order) to the media that “The forensic report clearly stated that no semen was found. We think some people took advantage of the situation, tried to disturb communal harmony, and create caste conflict. We are examining this and will arrest those who try to vitiate the atmosphere,” is beyond comprehension.

It appears that the officer  is oblivious of legal provisions or has pretended to pacify the anger by such a surreptitious statement. Another brazen defiance of the law is that the rape victim’s family has been incarcerated virtually at their place of abode for all ingress and egress has been sealed with massive troop deployment even media is not being allowed to report their version.The right to free speech has been gagged, the apparent violation of the constitutional command of article 19A.

The FSL report in a criminal trial can be used as evidence in any inquiry, trial, or other proceedings because of section 293 of the Code of Criminal Procedure, 1973. But in the legal and judicial sphere, it is more or less an opinion. The case, whether at the stage of investigation by the police or subsequently the trial under the judicial process, it could not be construed to be a paper/report beyond question.

Moreover, in the present case, the statement of the deceased was recorded as per the ADG, “The girl was conscious when she had given her statement at a local police station in Hathras to a journalist, and she categorically said there was one person who tried to strangulate her. Later, three persons were named for gang-rape,” adding,”The SIT has already begun a probe. Details will emerge once the investigation is completed within the next seven days.“

Section 32 of the Indian Evidence Act, 1972 state in explicit and unambiguous terms that the statement was given by the deceased before his/her death is relevant in the trial. This section is based upon the globally acknowledged principle that when a person is going to meet the maker, would not lie.

The statutory illustration (a) appended to the section states that “Statements made by A as to the cause of his or her death, referring respectively to the murder, the rape, and the actionable wrong under consideration, are relevant facts.“

The Supreme Court in the case of Prakash Vs. State of Madhya Pradesh AIR (1993) SCC 95 while interpreting the section said that “where the deceased victim knew assailants and gave their names to his family members at the first opportunity, his dying declaration could be relied upon.“

The investigating agency usually resorts to police padding to fasten the criminal liability upon the innocent accused to have laurels on its shoulder.

Strangely, in this most horrendous and horrific rape case, which can be conveniently termed as an open and shut case, the police padding is being done to save the accused from their respective culpability, which is an offense u/s 217, 218, and 219 of the IPC.

The High Court looking at the gravity of the crime and the indescribable police atrocities qua the discharge of their duties is expected to transfer the investigation to the CBI with the timeline to conclude the investigation.

It is also expected from the Supreme Court that to advance the cause of justice, the trial of the rape case may be transferred outside the State of U.P. with the stipulation to conclude in the period drawn by the Court.

PrevPreviousWhat happens if a US presidential candidate dies before the election or inauguration?
NextPunjab Protests Rattle the CentreNext
Author Related Post