Hathras Gang Rape Case: Another Apathetic Conduct of UP Police 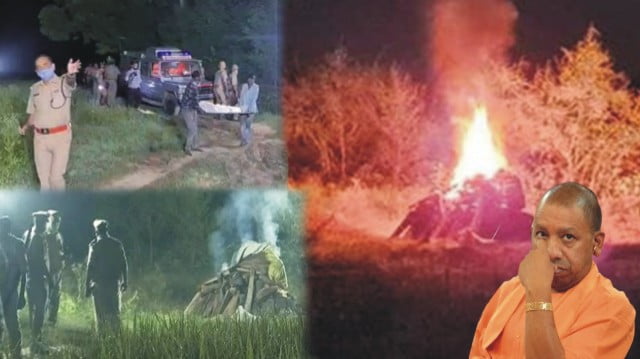 Police was hell-bent to create a smoke screen to shield its offensively inhuman handling of the gang rape case.

The horrible incident of the brutal gang rape of a Dalit Girl is accompanied by the further non-chalant attitude of the UP Police regarding the arbitrary cremation of the dead body before the dawn of 01.10.2020 at about 3.30 A.M.

It is a well-settled proposition of law beyond any cavil that a person has to live with dignity and also has to receive dignity post his/her death, including the last religious rites by virtue of the Providence of Article 21 of the Constitution of India.

This Article is regarded as more sacrosanct among the all other Constitutional provisions. But wretchedly, the State of UP and it’s reprehensively attitude exhibits undisputedly that it is immune of all applicable laws, Rules, and Regulations. No amount of condonation would be sufficient to forgive legally and socially, this pathetic and pitiful performance adhered to by the Police.

The Supreme Court,in the case of Parmanand Katara (Pt.) Vs. Union of India (1995) 3 Supreme Court Cases 248 laid down the law regarding post-death dignity “that right to dignity and fair treatment under Article 21 of Constitution of India is not only available to living man but also to his body after death.“

The whole country, rather world at large, is bewildered to what was the tearing hurry at the part of the administration to show such swiftness without the consent of the bereaved family members of the deceased to lit the pyre.

All religious rituals to be observed has been given a complete go-by. How badly it has hurt the bereaved family members and they have further been bludgeoned with unhealing religious wounds to the remainder of their life.

The only thing which can be conveniently deciphered from the attending circumstances, since the inception of the occurrence and the unfortunate passing away of the rape victim, is that the Police was hell-bent to create a smoke screen to shield its offensively inhuman handling of the gang rape case and saving itself from the onslaught of the Public outrage.

The Police, as usual under the influence of Khaki Power, is giving different versions qua the cremation. The same is not in sync with each other. Every pseudo narrative gives rise to another story, difficult to be stomached even by a most credulous person. The same, in turn, is landing the Police in a legal quagmire.

The independent investigation into the matter by the sitting or retired Constitutional judicial authority would unearth the lie through police teeth resorted by the authorities. As per data, Asia times; the incident of rape despite the stringent punishment, occurs in the population of 1.35 billion at the interval of every 15 minutes.

The moot question is why there is a spate of rape crime in spite of stringent law. The emphatic answer would be that the cases are not pursued with the vigorous velocity by the Police. The witnesses are intimidated by the criminals; who do not support the case of the prosecution before the court of law. Investigating agencies are also not tuned with the nitty-gritty of the law. The defense/accused takes advantage of the same.

The ill-effect of the same is that girls feel frightened to move outside in their own country. And the country has acquired the most inglorious name in the world at large. The foreigners think twice before coming to India, which in turn is adversely affecting the economy based on massive tourism income.

The entire Police force warrants to be revamped promptly to save the country, nationally and internationally, from the savage of rape renowned culture prevailing and dominating everywhere.

Also Read: Hathras Gang Rape – Stirs the nation and puts UP Police on the radar