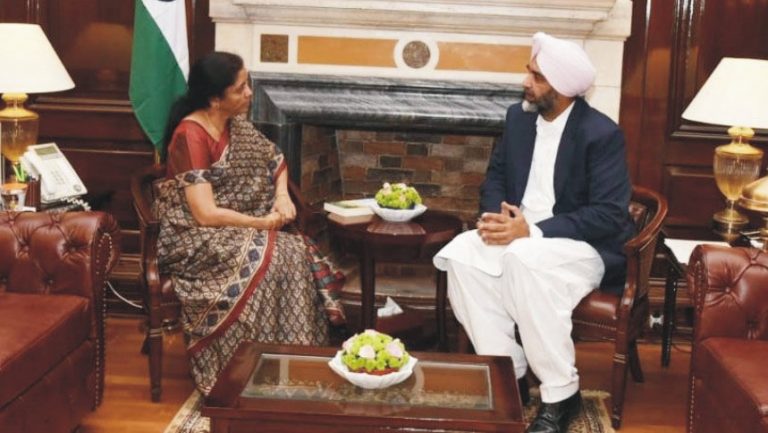 Any future dispute in relation to the GST Compensation will have deleterious impact on the States.

Out-rightly rejecting the two options offered by Union Government for GST compensation to the states, Punjab Finance Minister Manpreet Singh Badal on Monday shoot a letter to Union Finance Minister Nirmala Sitharaman to reconsider the decision, which was taken at the last Goods and Services Tax Council (GSTC) meeting.

Terming the decision a clear breach of the solemn and constitutional assurance by the Central Government, he said that it would be considered a betrayal of the spirit of cooperative federalism that formed the backbone of GST-journey so far. Punjab would like full clarity on each of these issues and the matter once again placed on the agenda in the next meeting of GSTC.

Manpreet Singh Badal also suggested to constitute GoM to deliberate on the matter and make recommendations in a time-bound period of 10 days. Punjab is prepared to cooperate in a spirit of finding a solution to this vexed problem but is unable to persuade itself to either of the options presented at this stage.

Punjab Finance Minister drawn attention towards the statements of the then Chairperson that the compensation would be 100% of the revenue loss; It would be paid within the stipulated period of 5 years; It is the Central Government that has the obligation to pay; Only the manner of funding was to be decided by the Council and If there were to be shortage, the required funds could be borrowed.

He said that the union government is unable to persuade itself to agree with these submissions and has now offered the two options breaking from a recorded past that has force as good as that of law. The constitutional provision itself expects that the central law on compensation shall be made in accordance with the recommendation of the Council. Any law which doesn’t recognize this recommendation is thus unconstitutional.

Highlighting the ambiguity in reimbursement methods, Badal said that provisions of GST law have not given clear view on the issue of those items, on which cess can be collected after five years, if the target is not achieved.

However, the draft GST Compensation Bill presented subsequently was worded making no mention of the liability of the union government or of such borrowing. In fact, when it was pointed out at the 10th meeting, the Secretary of the Council stated that the union government could raise resources by other means for compensation and this could then be recouped by continuation of cess beyond 5 years. Thus, it is evident that the GST Compensation Act was not worded as per the decisions of the Council but, in view of the assurance given by the Secretary to the Council, the Council agreed not to insist on the legal change.

Having enacted the GST Compensation Act-2017, the words “loss arising on account of implementation of the GST appearing in the constitution stand defined in the said Act, “An Act to provide for compensation to the States for the loss of revenue arising on account of the implementation of the goods and services tax in pursuance of the provisions of the Constitutional (Hundred and First Amendment Act, 2016)”, he stated.

Manpreet Singh Badal said that the word compensation has also been defined in Section 2 (d) of the said Act, “Compensation means as amount, in the form of goods and services tax compensation, as determined under section 7 of the Act provides for the manner of calculating compensation which is principally the difference between the projected revenue and actual revenue. The projected revenue is also defined in section 2 (k) read with section 6, which is 14% CAGR over base year revenue”. Thus, compensation can neither be increased nor reduced without amending this Act. Compensation is no more an executive decision at any level of the Government or even the Council, he added.

Centre is only recognizing GST-loss by assuming a 10% of the growth over PY and attributing the rest to the pandemic. This makes the whole exercise of calculating losses arbitrary, one-sided and devoid of any legal justification.

GST revenues were growing at about 4% in the Pre-COVID year 2019-20. The GDP growth in 2019-20, Quarter four of in particular, had also significantly slowed down. He said that applying a rate of growth of 10% to project a higher revenue loss due to COVID-19 is over-simplistic, statistically incorrect, besides being legally unsound.

COVID-19 has impacted different countries differently and within India different States differently. Punjab is primarily an agrarian state and restricting compensation uniformly for all States is devoid of sound logic.

Manpreet Singh Badal said that Punjab is now the highest GST-deficit-State in India. The state’s revenue loss in Option 1 would still remain unpaid even after availing our share of the special window as well as the additional 0.5% of the fiscal deficit. There may be other States on similar footing. Leaving the latter borrowing unprotected by any future revenue stream means the practical impossibility of such a borrowing, besides putting the State into a position of great peril. Option 2 is in breach of even what AG has stated in his opinion. There is no rationale for the union government to charge the cost of borrowings to the States.

It is also not clear when the impact of COVID-19 would be tapered off. The states should also have clarity about the scenario likely to emerge if they continue to follow a similar approach going forward. How will compensation be calculated in the period after January 2021?

If projections are made till the end of compensation period (with reasonable assumptions) the total revenue loss may cross 4.50,000 crore. This, together with interest, would require more than 4-5 years to repay the borrowings rather than 2-3 years that is being believed.

He said that it was stated by many members at the meeting that borrowings by States may be costlier anywhere from 50-150 basis points.

Moreover, the interest rates vary across States depending on the lender’s perception of respective financial soundness resources for payment have to come from a tax that is levied at by authority of the Parliament, it makes no sense for States to borrow individually, when they have very little role in the finalization of GST structure or tax rates.

“Our future borrowings and repayment capacity will alter based on what decisions are taken by the GSTC, where the union government alone has decisive vote. Any future dispute in relation to the GST Compensation will have deleterious impact on the States”, he added.

PrevPreviousIndia Is In Denial About The COVID-19 Crisis
NextEconomy Contraction: Do Not Blame Everything on the PandemicNext
Author Related Post