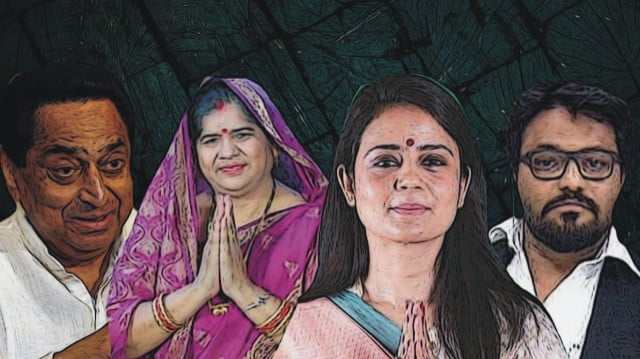 Not only the politicians but everyone must pay utmost regard and respect to the women.

Shakespeare in ‘King Lear’ said that “fortune of misfortunes, friends and foes reside in our tongue.“

Indian politicians will stoop so low, was never conceptualized by our founding fathers. They, by their supreme sacrifices, secured the freedom for us from the Britishers.

Mahatma Gandhi was called by the rogue British PM – Winston Churchill as ‘the half-naked fakir.’

This unsavoury phrase of the so-called great phrase-maker echoes down the decades. He invited more condemnation then and while Mahatma Gandhi rose to the zenith due to his excellent work, Winston Churchill is remembered for his foul mouth and tricky blister manoeuvrings.

A relatively recent remark by Kamal Nath, chief of Madhya Pradesh of Indian National Congress in an election campaign stirred the electotcate.

The genesis of the controversy is an offensive statement made by Kamal Nath during the election campaign in Gwalior for a woman politician, Imarti Devi who remained in Congress but later walked-over to BJP along with Jyotiraditya Scindia.

Kamal Nath adroitly did not name the woman political leader during the election rally but said “you know her better, what an item she is.“

The nasty and nauseating sexist remark was for Dalit woman politician.

The object, coupled with the intent of the misogynistic remark was quickly decipherable from the burst of laughter of the audience as well as of Kamal Nath.

Equally the politicians related to BJP are also not lagging behind, for Bisahulal Singh, the Minister for Food and Civil Supplies contesting from Amuppur (M.P.), has been booked for using the positively obscene word “Rakhail” (keep) for his Congress rival’s wife.

The explanation advanced by Brijesh Gautam, BJP district President of Amuppur, that such kind of language is used often among the tribes, is highly ridiculous. And in all sum and reality, it endorses the supremely scurrilous and pernicious vocabulary.

The word ‘Item’ or ‘Rakhail‘ connotes to sexist remarks and exhibits the perverted patriarchy of the leaders. Kamal Nath is an educated person.

Section 499 of the IPC reads thus:

“499. Defamation.—Whoever, by words either spoken or intended to be read, or by signs or by visible representations, makes or publishes any imputation concerning any person intending to harm, or knowing or having reason to believe that such imputation will harm, the reputation of such person, is said, except in the cases hereinafter excepted, to defame that person.”

The Government must prosecute Kamal Nath for his unsavoury and offensive sexist comment. The condemnation of Rahul Gandhi is not enough. The deterrent effect would come only after his expulsion to maintain the high standards of the Indian National Congress.

A trend for vulgar political abuses or unpalatable use of language or words has developed in every political party irrespective of their ideologies. The bed-rock of tenets on which the party propagates has gone in obscurity.

Usually, politicians who are frustrated with not being in power derive pleasure by making jibes at their opponents, mostly towards women politicians.

The women deserve the veneration, reverence and deference of highest degree.  The noble saint of 1398–1448 A.D. Kabir Das who is acknowledged as the tremendous social reformer despite having no background of any education, had said about the women in the Hindi couplet that:

“Never defame women. A woman is the mine of jewels, All men come out of woman, Dhruv Prahlad alike.”

The woman in the present era have accomplished great success by dint of their hard work, sweat, tear, and toil. The patriarchy ridden society is not relishing it.

It is ubiquitous to make all kinds of disparaging comments against the women of fame or position. It may be Mamta Banerjee, Jaya Lalita, Mayawati, Smriti Irani, Chandrani Murmu, Jaya Bhaduri, Mahua Moitra, Imarti Devi, etc.

The firebrand MP Mahua Moitra of Trinamool Congress was denigrated by the BJP MP Babul Supriyo in an NDTV debate in 2017. He obnoxiously remarked in the discussion “Mahua, are you on Mahua.” This assertion was suggesting that she is under the intoxication of the country made liquor Mahua found in abundance in the heartland of central India among the tribes.

The plant of Mahua is considered very auspicious by the tribes. According to Gond Mythology, the Mahua flower is a divine entity, believed never to dry up. A little bit of water is said to bring it back to life, no matter how dry it has been left.

Mahua Moitra mustered the exemplary courage by lodging the FIR u/s 509 of Indian Penal Code which relates to word, gesture, or acts intended to insult the modesty of women. Lately, the High Court of Calcutta had quashed the FIR among other things on the ground that the offensive comment does not fall within the ambit of insult to the modesty of women, courtesy the incorrect advice tendered to him.

The High Court at the same time was quite sensitive and gracious to observe that the complained act fairly and squarely is covered by the law of defamation having its origin in section 499 r/w 500 of Indian Penal Code.

Not only the politicians but everyone must pay utmost regard and respect to the women. They must shed their pathological patriarchal prejudices towards the women.

If they disregard respect through their foul mouth must be subjected to the law. Then it would work as a deterrent and object lesson who dare to toy and tinker with the modesty of the women.