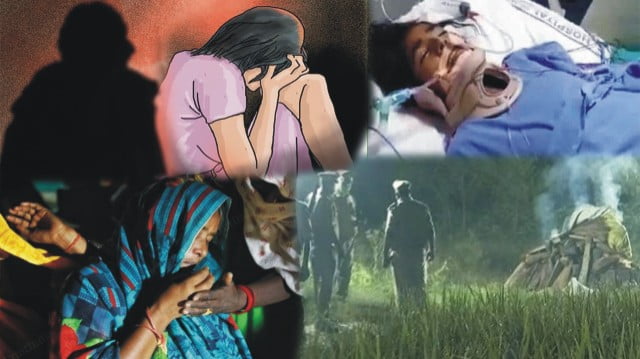 The apathy of the concerned Police towards the victim cannot be condoned under any circumstances.

The hapless victim of rape who was in her late teens, a Dalit girl from Hathras, UP after battling for life about a fortnight, sadly lost the battle at Delhi’s Safdarjang Hospital. The medical report indicates that she was paralyzed, her tongue was severely cut.

After the incident, she narrated her woes to the Police that she was dragged by tying her dupatta around her neck into a field by the four accused hailing from her village only. She was raped brutally by these four men, and after that, she was left in the lurch at the mercy of the Church with the dreaded warning that if she would tell the tale, her entire family would be liquidated.

Although, the F.I.R. was registered u/s 376-D (Gang Rape), which prescribes the sentence of not to be less than 20 years but which may also extend to life imprisonment. The life imprisonment would be the imprisonment for the remainder of the accused natural life, he can also be saddled with the fine commensurate to just and reasonable to meet the medical expenses and rehabilitation of the victim, and further, the fine imposed shall go to the victim.

This stringent provision was made in the year 2013 after the most inglorious case of Nirbhaya, which occurred in the National capital. The facts surrounding the present case reveals the crass and grotesque negligence, apathy, statutory dereliction duty both on the part of the Police as well as the medical staff.

Such incidents are not a new one. More or less in every part of the country, such horrible, horrific and horrendous crimes are occurring with no abatement, courtesy the State Police.

The Police of the State of UP has taken the lead amongst the Police of other states. Be it gang rape, rape, dacoity, murder, dacoity with murder, house grabbing, land grabbing, intimidation of witnesses etc., etc.

Earlier,the most inglorious case of Unnao (UP) in which the sitting MLA of BJP Kuldeep Singh Sengar was convicted by the Session Court of Delhi. The conviction entailed only because of the reason that with the judicial intervention, the trial was transferred from Unnao to Delhi.

There is an end number of rape cases and the list has exceeded the unreported cases for a variety of reasons, namely, social stigma, intimidation, security to the life and limbs of the family folks and the victims etc. etc.

Now, the ruling dispensation of the UP led by Yogi Adityanath has asked for the trial to be conducted in a Fast Track Court and a Special Investigation Team (SIT) was constituted to investigate the crime and submit the report within seven days.

The apathy of the concerned Police towards the victim cannot be condoned under any circumstances, come what may. For the reason, the F.I.R. at the first instance was not registered u/s 376-D I.P.C. inter alia on the ground that it could only be registered after the victim’s formal statements and the non-receipt of the forensic report.

Contrarily the law is quite different which mandates as soon as any information relating to the commission of the cognizable offense is received by the in-charge Police Station, the F.I.R. would be registered u/s 154 Cr.P.C.

The final report may be in the form of culpability of the accused qua the investigated crime or innocence, as the case may be.

The framers of the law Indian Penal Code, 1872 of British-India, namely, Lord Macaulay, have left no discretion to the Police to decline the registration of F.I.R.

In case after investigation, it is found that the F.I.R. was false and it was lodged with the ulterior motive to wreak vengeance against the accused named therein, would be followed by the criminal complaint either u/s 182 or 211 IPC as the case may be for their prosecution.

Rarely, it is seen that despite filing the F.R. (final report) to the effect no case is made out the provisions of 182 or 211 IPC are pressed into service.

The present case has stirred the Nationwide outrage resultantly the Prime Minister was constrained to take notice and speak to the Yogi Adityanath for stern action.

The indescribable brutality at the part of concern Police warrants in no uncertain terms that the delinquent public servants, herein,the Police, and the medical staff be prosecuted under chapter IX and XI of the Indian Penal Code.

The Police force is the relics of British-India, 186. The purpose of the then ruler was to oppress the public at large lest they raise their anger or displeasure against the ruling dispensation.

The Police force was constituted purposely on the premise of militaristic and authoritarian patterns, but the Police force under the Act of 1861 miserably failed to produce the desired results.

Consequently, the colonial rulers took the cognizance, and the India Police Commission was constituted under the chairmanship of Sir A.H.L. Fraser concluded:

“The police force is far from efficient; it is defective in training and organization; it is inadequately supervised; it is generally regarded as corrupt and oppressive; and it has utterly failed to secure the confidence and cordial co-operation of the people.”

The Commission despite noticing the failings of the Act, concluded that the system introduced in 1861 was, on the whole, a wise and efficient system. The conclusion so drawn was a biased one, for the Indian inhabitants were subjected to inhumane police behavior and not the Rulers.

Woefully the same is moving on with the supersonic speed even after getting the freedom from the Britishers’. As more or less, the same practice is prevailing everywhere. This hydra-headed problem cannot be contained unless and until inertia by the ruling political class is shed, which appears to be a herculean task, for inertia is dominated by the vested interest of the powers that may be.

Article 14 of the Constitution of India mandates in explicit and unambiguous terms that the state shall not deny to any person equality before the law or the equal protection of laws within the territory of India.Sadly this most significant Constitutional provision has been given a complete go by.

The Supreme Court time and again issued various commands and also made scathing observations qua the action or inaction of the Police, in the case of D.K. Basu, Sakiri Basu, Praksh Singh’s Police Reforms but to no avail.

To a good extent, blur vests with the Supreme Court for not initiating follow up, resultantly the commands are shining in seclusion.

A high-powered committee must be appointed by every State including Union Territories to screen the delinquent, corrupt, inactive police personnel and they be given the marching orders and the properties both movable and immovable accumulated by them which is disproportionate to their known source of income, be confiscated and they also are prosecuted in terms of the law in a time-phased manner.

Then and then only, the message will percolate, and the unscrupulous authorities will shudder to think of disowning the law. It will also instill confidence amongst the law-abiding citizen.

The Supreme Court is expected to take cognizance of the most heinous crime, and the trial of the case may be transferred outside the State of U.P. lest the witnesses’ are subjected to any kind of threat, intimidation and,bullying and a timeline also be drawn for the conclusion of the trial. Then only the majesty of law will sizzle.