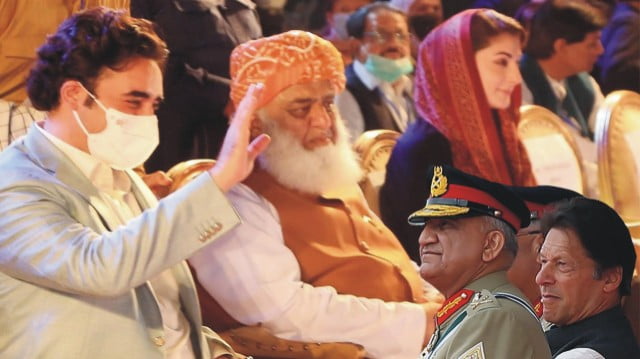 Who are these 11 parties which have formed the PDM in Pakistan?

THE RALLIES in Karachi and Gujranwala organised by the Pakistan Democratic Movement (PMD), and addressed by various speakers including former PM Nawaz Sharif (speaking online from London, which can be heard on Youtube) are over, and it can now be said, quoting Urdu poet Aatish, “Bas ho chuki namaz musalla uthaiye“.

It can also be said, quoting Shakespeare’s Macbeth “It is a tale told by an idiot, full of sound and fury, signifying nothing”.

Who are these 11 parties which have formed the PDM in Pakistan? They are a motley bunch of frustrated, discredited people having nothing in common:

Nawaz Sharif, who was known to be highly corrupt, and mentioned in the Panama Papers, with huge assets abroad.

Bilawal Bhutto whose grandfather ZA Bhutto threw Ahmadis to the wolves by the Second Constitutional Amendment for his political benefit, whose mother Benazir was highly corrupt and took huge sums abroad, and whose husband was known as Mr 10%.

Maulana Fazlur Rahman, that Rasputin of Pakistan, that fraud and rank opportunist, etc.

Have these people anything in common except their frustration by being out of power and deprived of the loaves of office ? Have they any genuine love or concern for the masses ? Not at all.

Namaz Sharif has named 4 senior army officers, including the present army chief Gen Qamar Javed Bajwa, for installing their puppet Imran Khan whose government is being blamed for all the ills in Pakistan. But does he seriously think there will be a military or other revolt to oust them ?

The Pakistan army is disciplined, and jealously protects its generals, including even the retired ones like Gen Musharraf (Nawaz Sharif’s ouster from power was because he started hounding Musharraf).

So despite all Nawaz Sharif’s loud rhetoric nothing will happen, except that now the Pakistan Government is likely to apply for his speedy extradition to Pakistan ( his 8 week bail for medical treatment is over ).

At most what the PDM will achieve, provided its agitation assumes large proportions, is the ouster of Imran Khan as PM, like a sacrificial goat, just as the agitation by the Pakistan National Alliance in 1977 resulted in the military coup by Gen Zia ul Haq and ouster of that demagogue Zulfiqar Ali Bhutto.

So my prediction is that if the PDM agitation grows and spreads in Pakistan it will culminate not by ouster of the Generals named by Nawaz Sharif but by a military coup deposing Imran Khan, and arrest of leaders of the 11 parties comprising the PDM, and break up of its constituent parties as happened to the PNA in 1978.

All the huge crowds which assembled in Karachi and Gujranwala will disappear when confronted by a ‘whiff of grapeshot’ from a company of armed troops.

Will any of our poets write such a battle anthem of the comi....

The Indian media and the coming Indian revolution....

Not mosques, churches and temples but good schools and scien....

Prime Minister Modi should be applauded for condemning Chine....