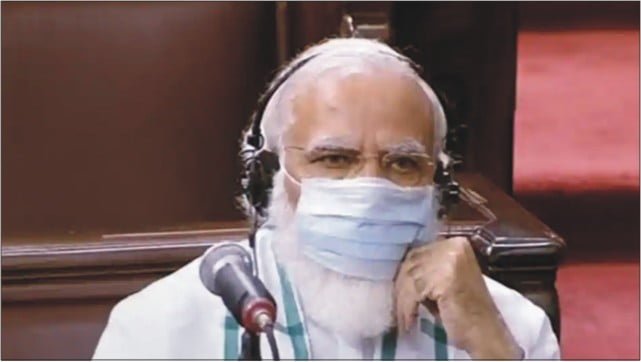 It’s clear now that Modi government is not willing to share any information.

One of the most unfortunate aspects of the Narendra Modi government has been the lack of transparency and its unwillingness to give answers. It prefers to carry out a one sided monologue and have only its say. This tendency is manifest in several actions taken by the current government.

The steadfast refusal of Prime Minister Narendra Modi to hold any press conference, and consequently to answer any question from the media, has also had trickling down effect. Thus now even the other ministers of the Modi government also don’t answer questions even if they do address press conferences.

The reasons given for dropping the question hour – that it was a curtailed 18 day session in view of covid pandemic – also stands on weak grounds. An hour-long question hour could have been easily accommodated during the session.

Question hour provides an opportunity to the elected Parliamentarians to seek answers from ministers and they are supposed to answer all questions. While for the non-starred questions only a written reply is given, the minister concerned has to compulsorily be present in the House and reply to the questions and even supplementary questions asked by the members. The ministers, including the prime minister, was bound to answer correct answers or face privilege motion against them.

By doing away with the question hour this time, the government has been able to evade answering questions on highly critical issues like the handling of coronavirus pandemic, impact of lockdown, plight of migrants, the state of economy and the issues relating to China. The written answers provided to the questions from members are generally vague and hide more than what they reveal.

It has also not explained why government departments, corporations and institutions were made to donate to the fund. Even Railways, which is running into losses, was asked to contribute to PM CARES.

Not just the Public sector companies, a large number of educational institutions, from Navodaya schools for rural students to IITs, IIMs and central universities, have together contributed Rs 21.81 crore, mainly through staff salaries. It has collected Rs 9677 crore for the fund so far.

However, Modi government is refusing to share the details of expenditure on the grounds that it does not fall under the category of government entity and thus information can’t be shared through the RTI.

By controlling the tenure and acquiring the authority to fix salaries, allowances and other terms of service, the Modi Government has radically altered the character of the Information Commissions and it is clearly against the principles of cooperative federalism.

The Modi government, in its defence, has said that Information Commissions were statutory bodies and therefore it has the right to make rules.

The suspension of eight opposition members from Rajya Sabha, lack of consultation with opposition parties and failure to brief leaders of other parties on the current situation are some of the other pointers to the Modi government not willing to share information.

The Modi government may be smug with the facts that it has won two consecutive Lok Sabha elections and may be set on course for a third tenure given the battered and demoralised opposition, but it must not forget that there are counter points of view and that nearly two thirds of the voters had not voted for it. The arrogance of power has brought down many powerful regimes in the past.