Proposed meeting of CM with Guv: Another fraud with farmers of Punjab 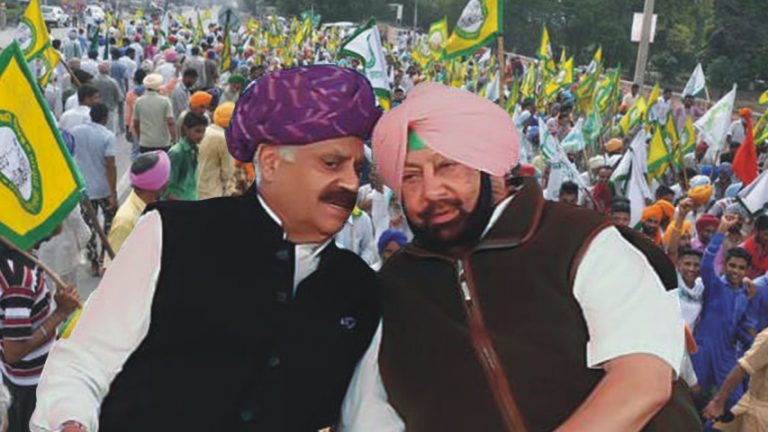 The startling revelation was made by Raosaheb Dadarao Danvey, Union Minister of State of Consumer Affairs, Food and Public Distribution, on the floor of the Parliament yesterday that the Punjab Chief Minister was on board to approve the Agriculture Ordinances.

The sudden alarming development has added new twists and turns to the already complicated scenario leading to the farmers’ unrest in Punjab. The development certainly entails careful scrutiny of the ingenious role of the Chief Minister of Punjab Capt. Amarinder Singh if the statement of the Central Minister, made in Parliament is factually correct.

Initially barring Punjab, the Maharashtra, Karnatka, Haryana, Arunachal Pradesh, Gujarat, Uttar Pradesh, Madhya Pradesh were taken on board, but when Punjab raised a high-pitched objection to its omission before the NITI Aayog, Punjab was included in August 2019.

The High-power committee of the Chief Ministers was constituted by the NITI Aayog to discuss measures for transformation of Agriculture and raising farmers’ income.

Because the Punjab farmers’ have lost their case in preference to the corporate houses therefore the roguish role of the Chief Minister of Punjab Capt. Amarinder Singh requires a deep and penetrating study with clinical precision.

Whether CM really stood for the cause of the Punjab farmers or he betrayed them in preference to his corporate friends, since the time he has become member of the High-power committee of the Chief Ministers’.

The Punjab Chief Minister has to answer some very pertinent questions before he calls on the Punjab Governor tomorrow. The questions are as follow:

1. Why did you not care to attend, even one meeting of the most important High-power Committee of the Chief Ministers, that was constituted to discuss measures for transformation of Agriculture and raising farmers’ income, despite being Agriculture Minister of Punjab? What were your other pressing and more preferred engagements, elsewhere other than the issue of Farmers of Punjab?

2. Why did you chose to send your Finance Minister Manpreet Singh Badal to attend the meeting of the High-power committee held in August 2019 at Mumbai, which was attended by all other Chief Ministers of the members states, except you CM Punjab. Does this not show your lack of concern towards the farmers issue and non-seriousness’ towards the sagging Agriculture economy of the State?

3. Did the Finance Minister Manpreet Singh Badal who attended the meeting of High-power Committee of the Chief Ministers held in Mumbai on August 6, 2019, along with Secretary Agriculture Punjab, Kahan Singh Pannu, try to acquire the proceedings of the previous meetings of the High Power committee, where the issue of ordinances was deliberated upon, when Punjab was not represented on this very significant forum, in order to formulate Punjab’s view point on the issue? If so, then how did the Punjab Government record its objection to the proposed move?

4. The Highly placed credible sources reveals that in the meeting of the agriculture Secretaries of the member States held on 3rd September, 2019 where Punjab was represented by Kahan Singh Pannu, then Secretary Agriculture Govt. of Punjab, it was made unambiguously clear that the ordinances in the present form are in the offing and the Govt. of India was determined to do so.

I am sure Mr. Chief Minister, that the Punjab Agriculture Secretary, Kahan Singh Pannu, must have submitted his detail note to you regarding the mischievous and catastrophic intent of the Govt. of India to destroy the farmers by completely jeopardizing the existing MSP regime by replacing it with a new system through ordinances and the current marketing system of the agriculture produce shall be crippled completely?

5. The above noted briefing must have been done by Kahan Singh Pannu in the Month of September 2019.
Now you tell Mr. Chief Minister, What was your response for seven months till Covid-19 pandemic broke out in the Country by March end in 2020? Were you in slumber for seven months or you were hand in glove with corporates and deliberately looked other way around till the anti-farmers Agri-Ordinances were promulgated by the President of India on June 5, 2020.

Even thereafter Mr. Chief Minister you did not meet the Prime Minister Narender Modi or the Union Agriculture Minister Narender Tomar even once on the issue. You sould have requested the Prime Minister for a structural meeting after the Agriculture Secretary Pannu, has brought the sinister design in black and white to your notice. But you choose to remain silent. Your baffling silence for seven most crucial months have completely destroyed the farmers’ of Punjab and their catastrophic loss is irretrievable for time to come.

There are reports in the media that tomorrow you are meeting the Governor of Punjab along with your chosen ‘Number Ten’ colleagues including PCC President Sunil Jakhar and some ministers. Punjab is eagerly waiting to know your revealing list of ‘Number Tens’ tomorrow.

Unfortunately, the numerical number ‘10’ correspondingly does not indicate good omen and it certainly does not reflect the honesty of conduct and purpose. Perhaps which is why the register number 10 is maintained in every Police Station to keep the record of the habitual offenders of the law, in the area of the Police Station.

The meeting of the Chief Minister along with other ‘Ten’ with the Governor is another monumental fraud being committed against the farmers of Punjab. What is the locus standi of the Governor vis a vis the proceedings of the Parliament?

The Hon’ble Governor is the constitutional Head of the State, constitutionally he cannot entertain any complaint against any Member of Parliament or the Minister, for any of reference made on the floor of the Parliament during its proceedings.

As a matter of Parliamentary procedures the Governor cannot even discuss the proceedings of the Parliament, particularly when the Parliament is in session. If a Minister of State, Govt. of India has made a statement on the floor of the ‘Parliament’ which is factually incorrect as per the version of the Chief Minister Capt. Amarinder Singh, the appropriate forum to seek remedy is the parliament alone.

Rather than bringing the constitutional office of the Governor into unsavory controversy Capt. Amarinder Singh should ask his Congress party in Parliament to move a privilege motion against the Minister Raosaheb Dadarao Danvey for misrepresenting the facts in Parliament and if that is proved the Minister could also be censured by the parliament.

I wonder as to why the Chief Minister has decided to follow the wrong route instead of approaching the parliament through Members of Parliament, representing the State of Punjab.

I would also beseech the kind attention of the Hon’ble Governor of Punjab with a request not to get embroiled in an unnecessary, prejudiced controversy, which Capt. Amarinder Singh wishes to play to the galleries by using the fair name of ‘Raj Bhawan’ just to camouflage his own colossal failures by not protecting the interests of the farmers of Punjab, a reason best known to him.

If the proposed, much hyped meeting with the Punjab Governor is blown out of proportion in the media tomorrow, any party in Parliament could potentially play a mischief to embarrass the ‘Gentleman Governor’. It could even lead to the Governor V.P. Singh Badnore facing breach of privilege of the ‘House’ – The Parliament of India .

PrevPreviousSaini and Courts: Justice should not be a Mirage
NextCovid-19 & Desh-dhrohNext
Author Related Post