The media focus on Rhea and Kangana suits no one better than the BJP led central government which would like citizens’ attention away from economy, unemployment and China! 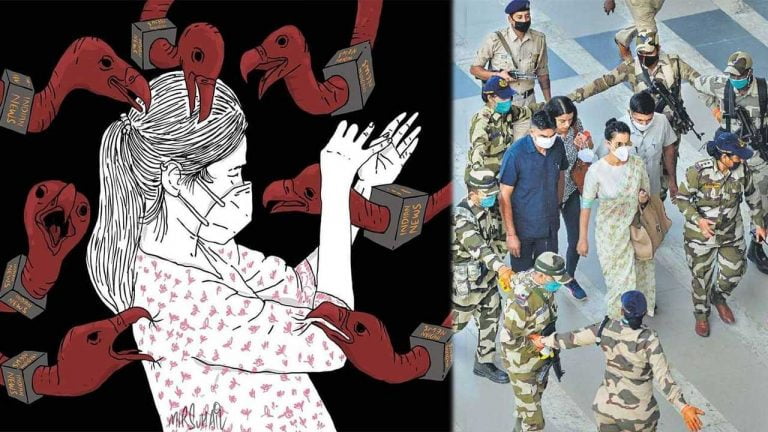 THE RECENT and continuous coverage of actor Sushant Singh Rajput’s death and the hounding of his girl friend Rhea Chakraborty has plummeted the standards of electronic media to a new depth.

Barring one or two honourable exceptions, all TV channels are running non stop coverage of the subject over the last month and a half. A majority of them have even taken clear stands on whether it was a suicide or a murder and whether Rhea was the ‘killer’ or that she was a victim herself and that his sisters were responsible.

The coverage also appears to have split the country into two camps. One camp, a small one, feeling disgusted with the news channels for going down to such shameful depths and making personal allegations without any evidence.

The other camp, which evidently is far far bigger in size, is of the gullible public who appear to be enjoying every bit of it. They have convinced themselves that there is much more to the incident than mere suicide and conspiracy theories are being believed as gospel truths.

Some of these ardent fans have themselves turned investigators and point out the alleged ‘discrepancies’ in the case.

This writer personally knows people who have switched over to channels which are providing carpet to carpet coverage of the incident. In fact they are running the shows on a loop and you can watch these any time of day and night.

One particular channel, otherwise considered to be better than others, declared pompously a couple of days after the incident that it was unlike other channels and won’t give the kind of prominence as others were giving to the Shushant Singh case.

However from the very next day of the claim, this channel took up the issue as its first lead for several days to come. It not only ran an ‘exclusive’ two hour interview with the main accused in an FIR, Rhea Chakraborty, the channel ran that interview for nearly a week in its prime slot!

Clearly these channels, and I would like to include over 90 per cent of news channels in this category, don’t think that anything else significant is happening in the country. For them the serious crisis on the India China border in Ladakh region is a minor issue.

For them the critical stage of our economy is a non issue. And so is the rising unemployment and even the Covid pandemic which has claimed 74,000 lives and has affected over 45 lakh citizens.

As a nation we need to seriously think of our priorities and what we are being fed. Neither such TV channels nor those who watch these so closely are doing any service to the nation. All talk of self regulation is proving meaningless.

Though the electronic media has a regulator called the Broadcast Regulatory Authority of India. However this too has proved to be totally ineffective. Perhaps the main reason for its poor show is the kind of persons who are appointed to monitor the media and take action against the erring channels. Also it needs to be given more teeth.

It is obviously that this vicious circle of dishing out more masala for higher TRPs in the electronic media is responsible for this mess leading to loss of and wastage of crores of man hours in inane debates. The TRP ratings influence the advertisers and that’s where the malady lays.

It is essential that the system of TRPs, which is known to encourage favouritism and corruption, must be reformed. For that the government must step in and reform the system. But will it step in when the current state of electronic media suits it the most and keeps people diverted from the real issues facing the nation?