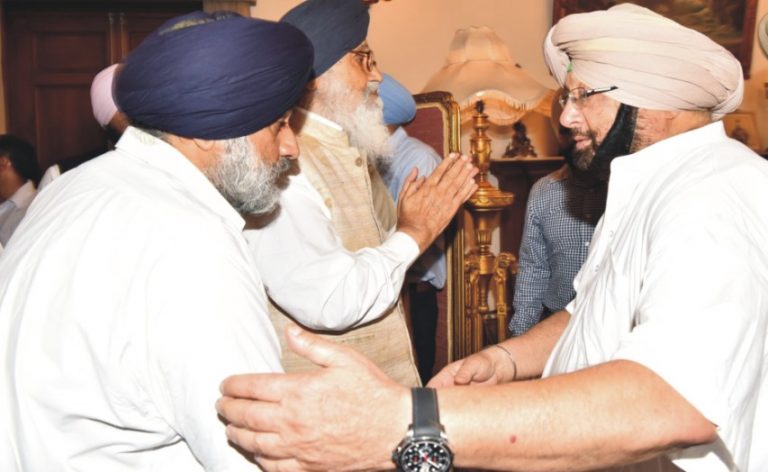 As farmers protests against recently passed Farm Bills are going on in Punjab, major political parties are busy in playing a game of TuTu-MainMain.

Pinning them down on every single ‘lie’ mouthed by them over the past few days, the Chief Minister asked Sukhbir and Harsimrat Badal 10 pointed and pertinent questions.

Responding to the no-holds barred attack launched by both Sukhbir Badal and Harsimrat Badal since the ordinances were ready for introduction in Parliament, the Chief Minister said the duo had been fabricating lies on the whole issue just to cover up their muddied faces, which had been completely exposed.

Pinning them down on every single lie mouthed by them over the past few days, the Chief Minister asked Sukhbir and Harsimrat:

* “Did either of you even once call the Ordinances anti-farmer till they were presented in the Lok Sabha?”

* “Was Harsimrat not part of the Union Cabinet when the Ordinances were introduced without consulting any of the stakeholders, considering that one of the reasons cited by her for her resignation was that the Centre failed to address her demand for discussions with these stakeholders?”

* “Did Harsimrat even once, till her resignation, tell the farmers that she was trying to persuade the Central Government to address their concerns – something she is now claiming?”

* “Why does she continue to describe the concerns as those of the farmers and not her own if she is truly concerned about the destructive impact of the new laws on them? Does this mean she herself still believes those atrocious legislations to be pro-farmer, contrary to what she is trying to falsely project to the farmers?”

* “Why is SAD still part of the NDA given that, by Harsimrat’s own admission, the BJP-led government failed to address the farmers’ concerns she put before them?”

* “Can you cite even one pro-farmer initiative you have persuaded the BJP-led government at the Centre to take over the past 6 years?”

* “Did Sukhbir not state clearly and unambiguously at the all-party meeting convened by me on the issue that the Ordinances were not anti-farmer and would actually benefit the farmers?’

* “Were either of you present in any of the meetings of the high-powered committee, on which you are making baseless claims of my government’s stand and responses?’

* “Why have you and your party chosen to deliberately and maliciously ignore the key portions relating to Agriculture in the Congress party’s LS manifesto of 2019 and the Punjab Congress manifesto of 2017?”

* “Do you really believe that by repeating your lies often enough you will be able to make them sound like truth and befool the farmers, whose lives your party was directly responsible for destroying through 10 years of your misrule in Punjab?”

The Chief Minister said he was sure that the Akalis, and the Badals, could offer no reasonable explanation or rational answer to any of these questions, which only touch the tip of the iceberg, as far as their sins are concerned. The people of Punjab, especially the farmers, will not forgive them, he added.

“The Ordinances, which you had been shamefacedly supporting all through till you decided to back off under political compulsions out of fear of losing your farmer vote-bank, were never discussed or even mentioned at the high-powered meetings – a fact on which your coalition partners either deliberately kept in the dark or which you chose consciously to ignore in your own petty interest,” he told the Badals.

“How could the Punjab government have concurred on something that never came up for discussion?” he asked, adding that unlike the SAD, the Congress had maintained a consistent stand against the Ordinances which the Centre introduced on the sly amid the pandemic and then pushed through the Lok Sabha by sheer brute majority.

Also Read: Farmers protests: A Century later we are Going Back to Square One

The Badals should stop lying on such a critical issue, and instead, come out in open fight against the NDA coalition by withdrawing from the alliance, said the Chief Minister, adding that their claims of standing shoulder to shoulder with the farmers were hollow and false as long as they continued to lie on the subject and remained a part of the anti-farmer Central Government.

PrevPreviousBDPO Shifted over a circular regarding Govt Sponsored Dharna
NextSAD-BJP rumblings: what about Sikhs who live in India but outside Punjab?Next
Author Related Post