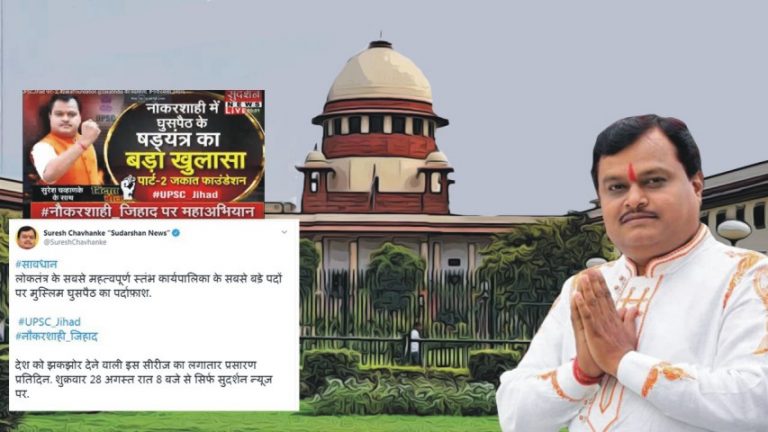 A petition was filed against Sudharshan News by Firoz Iqbal Khan to direct Sudharshan TV to defer the broadcast of its program, captioned as a “Big expose on the conspiracy” vis-à-vis Muslims “Infiltrating Government Service” until further orders.

The Supreme Court, after hearing the parties and after assessing the gravity of the matter concluded firmly, that the interim order is essential to contain the insidious charges leveled against the particular community and further commented that such insidious charges also put a question mark on the credibility of the UPSC exams.

The Supreme Court was further constrained to observe, ‘can such programs be allowed in a free society ?’ A group of formal civil servants also filed an application in the petition, to be impleaded as an intervenor to support the cause of the petitioner.

The interim order of the Supreme Court restraining the Sudarshan T.V. to telecast its programme captioned “Infiltrations of Muslims in UPSC” invites world-vide eulogization, for the same being contrastingly beyond freedom of speech incorporated under Article 19(i)(a). The same reads thus:

“19. Protection of certain rights regarding freedom of speech, etc. (1) All citizens shall have the right:-
(a) to freedom of speech and expression;
(b) to assemble peaceably and without arms;
(c) to form associations or unions (co-operative societies);
(d) to move freely throughout the territory of India;
(e) to reside and settle in any part of the territory of India;
(g) to practice any profession, or to carry on any occupation, trade, or business.”

It is well settled beyond any cavil that the right of free speech is not absolute. But it is with the caveat of reasonable restrictions. Now the question would be, what are those restrictions?

The emphatic response to the same in tune with Constitutional Command unfailingly would be that those who vilify a particular community; spread hatred, disturbs harmony in the society; transcends individuals privacy, excites disaffections amongst the different Communities, or bred feelings of enmity or ill-will between the various clans of the society.

The Supreme Court, rightly perhaps in its judicial wisdom, has felt that preposterous propaganda with an evil eye to serve the polemics of politics cannot be permitted to prevail in a Democratic State. The same being against the basics and fundamental tenets of ‘Secularism.’

The scathing observations of the Supreme Court

“Intent, object and purpose is to vilify the Muslim community. An insidious attempt to insinuate that the community is involved in a conspiracy to infiltrate the civil services. Several statements in the episodes are not just palpably erroneous but have been made in wanton disregard of the truth.

India is a melting pot of civilizations, cultures, religions, and languages. Any attempt to vilify a religious community must be viewed with grave disfavor by this court as custodian of constitutional values. Its duty to enforce constitutional values demands nothing less”

coupled with the other oral observations, instantaneous reactions to the submissions and counter submissions are worthy and virtuous to the crown of SECULARISM.

During the term of Justice Arun Mishra, who demitted the office on 2nd September 2020, the Supreme Court was brazenly engulfed with numerous unsavory and unpalatable criticism. The Apex shrine of our judicial system was desecrated with end number of captious and carping that now onward, the shrine will never regain its sheen (judicial-even handed justice).

One should not easily jump to the prophet of doom or gloom. Contrarily the optimism must be kept alive and ticking. It reminds me of the saying of Pablo Neruda, the Noble laureate, Senator, Poet diplomat who aesthetically worded pessimism pitting with optimism that”You can put all the flowers; but cannot stop spring to come“. The interim order (supra) must be recognized as a harbinger of spring.

We should join our heads together to make the judicial dispensation comprising of all Constitutional and non-Constitutional Courts stronger & stronger. These institutes must not be seen as a punching bag. The good or bad time will come and go but the institutes shall remain there. British Poet Lord Alfred Tennyson, in his famous poem “The Brook” said lucidly that “For men may come and men may go, but I go on forever“.

In a recent interview with India Today on 12th September 2020, the leading legal luminary, Shanti Bhushan, former law minister in the Janta regime (1975-1977), said that today it is difficult to find out which Judge is honest.

However, his son Prashant Bhushan tried to salvage the situation by saying that honest judges have become weak. The author is partially in agreement with the later version but is totally in disagreement with the former part uttered by veteran lawyer. This indeed has subdued the moral of good, honest and oath abiding Judges.