BDPO Shifted over a circular regarding Govt Sponsored Dharna 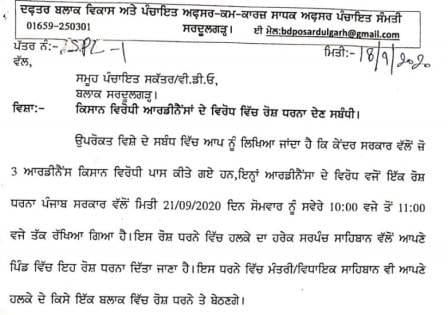 YESTERDAY, Punjab Today  found a circular and share the same on social media. In the Circular, the Sardulgarh BDPO had instructed village sarpanchs to protest the Farm Acts on September 21 and send back records of compliance with his orders. He had also urged local political leaders to lend support to the protest.

The Congress has outsourced its party programs to Panchayati Raj dept. Now dharnas against GOI on ordinances issues are official events of Punjab govt. BDPO has issued orders to panchayat secretaries accordingly. Even orders them to share photos of event with PPCC media cell. pic.twitter.com/U7rbEYFld2

Upon Punjab Today questioning the genuineness of the circular and if it was indeed ordered from the CM Office, the Punjab government refuted the circular and has issued the following clarification:

TAKING serious cognizance of the matter, Punjab Chief Minister on Saturday ordered shifting of the Sardulgarh BDPO to Headquarters, and immediate withdrawal of the letter issued by him regarding some farm protests which he incorrectly claimed to have been organized by the Punjab Government.

The Punjab Government has not organized any such protest, as claimed by the Block Development and Panchayat Officer (BDPO), said a government spokesperson.

The overzealous BDPO had, on his own, announced a protest dharna on September 21 and had issued a letter asking all Panchayat Secretaries under his block to intimate all sarpanches about the same. He had also wrongly claimed that Ministers/MLAs will also join these protests, said the spokesperson, rejecting any such plans by the state government.

The Punjab Government had neither planned such protests against the farm ordinances nor asked the BDPO to issue the letter in question, said the spokesperson, adding that the Chief Minister has asked the concerned officials to inquire into the whole affair and pin down the responsibility for this incorrect communication.